You are here: Home / Sports / Film study is crucial for Iowa Conference newcomer 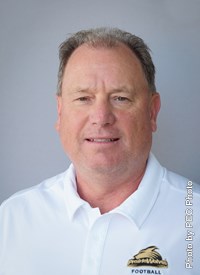 It has been a busy summer for Nebraska Wesleyan football coach Brian Keller and his staff as they studied tape on a string of new opponents. After competing in the Great Plains Athletic Conference since 2000 the Prairie Wolves are getting set for their first season in the Iowa Conference.

Nebraska Wesleyan will now compete strictly in NCAA Division III after being a dual member of NCAA Division III and NAIA since 1982. The Prairie Wolves are the ninth member, and the first from outside the boundary of Iowa, of a league that dates back to 1922.

The Prairie Wolves have 15 starters back from last year’s team that finished 4-6 and Keller says a key will be how quickly a young offensive line develops.

“Garret McCarthy is a senior tackle and Jacob LaMarche is a sophomore right guard and those are the two starters who are back”, said Keller. “The rest of the guys have had very little playing time at the college level. They are very talented but the learning curve is pretty steep right now.”

Nebraska Wesleyan’s Iowa Conference opener will be at home September 17 against Wartburg. They open the season with a non-conference game at home on September 3 against McPherson College of Kansas.