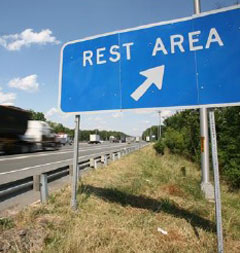 In our fast-paced 24-7 society, many Iowans are sacrificing sleep, which can sometimes lead to deadly consequences on the road.

“The drowsy driver is an unsafe driver,” Avery says. “The new report on this, just out from the Governors Highway Safety Association, points out nearly 83.6 million sleep-deprived Americans are driving every day and this is taking a toll. An estimated 5,000 lives were lost in drowsy driving-related crashes last year.”

The estimate of deaths caused by drowsy drivers ranges from between 2 percent and 20 percent of all traffic fatalities and the full extent of the problem isn’t known.

“The extreme danger posed by tired drivers has prompted the National Highway Traffic Safety Administration to expand its definition of impaired driving,” Avery says. “It includes not only what we already are well aware of, which is drunk, drugged and distracted driving, but also drowsy driving.” The average adult requires at least seven hours of sleep each night, but Avery says it’s rare any of us get that much.

“Lack of sleep negatively impacts performance,” Avery says. “It slows your reaction time, it impairs your judgment, it lowers your situational awareness. This can lead to lapses in attention and taking risks.” The national reports singles out four states for efforts to combat drowsy driving and Iowa is among the four.

“Earlier this summer, the Governor’s Traffic Safety Bureau had a statewide drowsy driving summit at the University of Iowa,” Avery says. “At that time, they talked about the extent of the problem, what’s being done to address it, and set some short- and long-term strategies to try to improve the situation.”

If you find yourself head-bobbing while behind the wheel, take a break. Avery says to get off the road, give yourself a chance to recuperate, and establish a new routine that enables you to get more sleep.