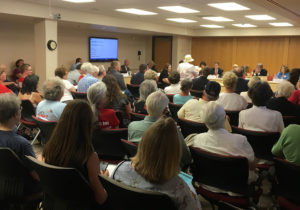 Dozens turned out to express support for or opposition to the Prestage plant.

A state board has approved nearly $11.5 million in state tax credits for the proposed pork processing plant near Eagle Grove.

Supporters and opponents of the Prestage Foods project spoke this afternoon at a public hearing in Des Moines, just before the board approved the incentives. Becky Bradburn of Clarion is general manager of the Prairie Energy Co-op.

“Big projects like this don’t normally land in small communities in rural areas,” Bradburn said, “so I’m very excited and hopeful that you’ll approve the assistance.”

Veronica Guyador lives a mile-and-a-half from the proposed site.

“This is not good for us,” Guyador said. “…It will bring Wright County into more poverty. We’ve already been listed, I don’t know, like five years or more in a row in the top five poverty-striken counties in the state of Iowa.”

Al Wulfekuhle of Quasqueton, the president of the Iowa Pork Producers, also addressed the Iowa Economic Development Authority Board that first considers “due diligence” on financial incentives packages. 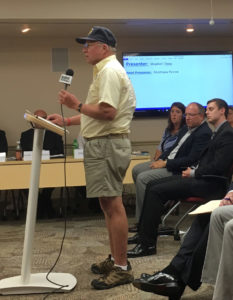 Stephen Tews addresses the board.

“We also need more competition in this business and Prestage Foods is a new entity which’ll create more competition for independent producers like myself,” he said, “so the Iowa Pork Producers strongly support the Prestage family in building the plant.”

Sharon Donovan of Perry told the board Prestage would build in Iowa without the incentives, since Iowa is where all the hogs are.

“Prestage should be paying Iowa for the right to locate here and to benefit from our infrastructure, from our land, from our air, from our water,” Donovan said. “We should receive the money, not giving them $11 million.”

“If you go around Eagle Grove, there are over 100 yard signs that want this project in there,” Davis said. “We believe it’s going to be a really good economic impact.”

Kathy Schnell of Belmond said because of decisions like this, Iowa is becoming “the feedlot between two rivers.”

“We do not relish the thought of handing over $11 million to wealthy out-of-state family so that they can further build their family empire,” she said.

Jim Vermeer, vice president of business development for the Corn Belt Power Cooperative in Humboldt, is also a leader in a regional development group that supports the Prestage project.

“It’s not every day we get a $240 million project in a rural area that helps support agriculture,” Vermeer said. “I’ve worked with Prestage the last few months and they’re great people.”

JoAnn Hardy of Mason City said with this Eagle Grove plant and another one to open in Sioux City, there’ll be a push to build more hog confinements to supply more hogs to those slaughterhouses.

“Why do you give incentives to projects that will increase pollution in our beautiful state while the Iowa legislature is trying to find $5 billion to clean up our waterways?” This is insanity,” she said. “Why do we have to pay on both sides?”

The Iowa Economic Development Authority Board voted 8-1 to approve the tax breaks for the Prestage facility, with the stipulation a package of county incentives must be approved as well. The state board had approved a similar incentive package when Prestage was considering a site near Mason City.

The Wright County Board of Supervisors will vote on local incentives for the project at its Monday meeting.

A spokesman for Prestage Foods of Iowa said the plant will have a $450 million annual impact on the state. Nearly a thousand people will be mployed at the plant, at an average hourly wage of $15.70. Prestage Farms, a North Carolina-based family business, has had hog confinements in Iowa for more than a decade and 60 percent of the hogs slaughtered at the Eagle Grove plant will be owned by Prestage.

(This post was updated at 6:26 p.m. with additional information.)