You are here: Home / Agriculture / Crops pass the eye test, but will yield projections hold true? 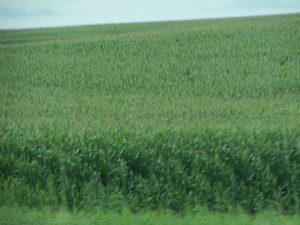 The U.S.D.A is predicting record corn and soybean yields in several states, including Iowa.

“I guess I really think they’re pretty similar to last year and last year was a good year,” Jacobsen said. “I don’t know if it’s going to be the end-all, be-all of crops, but I think it’s going to be a solid crop. I think we’ll have high end of yields on both corn and soybeans.”

Iowa ag secretary Bill Northey agrees the crops look excellent, but problems may be popping up in some corn fields. “I’m starting to hear from a few folks who’ve gone out and have seen some tipping back. It was maybe the heat in June, maybe they went through a dry spell,” Northey said. “My sense, so far, is that’s just in some pockets.” The term “tipping back” means the kernels don’t fill all the way out to the end of the ear. Those barren tips can reduce the yield.

As to whether those U.S.D.A. projections sound right, Northey says we won’t know for sure until the combines hit the field this fall.