You are here: Home / Military / Navy veteran picked to be a roadie for KISS 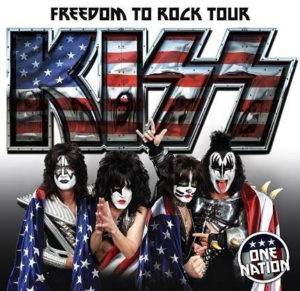 Long before the legendary rock band Kiss takes the stage at the Iowa State Fair tonight, a central Iowa man will be living a dream as the Kiss Roadie of the Day.

Forty-seven-year-old James Martin of West Des Moines, who served in the Navy, was picked through an online program that honors military veterans. Martin has never been a roadie before, but says he’s a quick study.

“I’ll be doing some of the stage set-up, I’ll be involved in some sound check stuff and also organizing the VIP area for people that go through the VIP,” Martin says. “I will be meeting the band and will get some photos and autographs and such.”

Martin says he’s “ecstatic” to be going on this adventure and meeting the Rock & Roll Hall of Famers who are his longtime musical heroes. In addition to helping prepare the venue, he’ll have excellent seats once the concert starts.

“As I understand it, I’ll be in the first couple of rows to watch the show and then they’ll bring me back-stage,” Martin says. “During the encore, they do a presentation with Hiring Our Heroes, and I’ll come out on stage.” He was first introduced to Kiss when he was eight or nine years old during a visit to the home of a friend from elementary school named Ed.

“He’s a big music fan and we were in his room and he put on this record of Kiss and I just remember ‘Detroit Rock City.’ That was the song and it somehow connected,” Martin says. “The face paint and the characters, I’ve been a lifelong fan of Kiss.” Martin served in the Navy from 1987 to ’91, including during Operations Desert Shield and Storm in the Persian Gulf. He’s now a claims manager for Wells Fargo.

Martin says Kiss has an exceptional program that honors veterans and people on active duty at every stop on the tour with free or discounted tickets, meet-and-greet packages, the Roadie of the Day and a special tribute to those who served during the show. “They’re very vocal about supporting the military,” he says.