You are here: Home / Sports / Luther football eyes next step 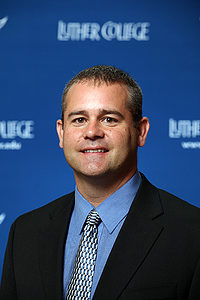 In his three years as head coach Aaron Hafner has made the Luther College football program competitive, again. His next goal is to show the Norse can compete against the top teams in the Iowa Conference.

During a 4-6 campaign in 2015 the Norse nearly stunned regular season champion Dubuque but suffered lopsided losses to Wartburg, Central and Coe.

“We have talked a lot in camp about being able to compete at a high level against the best opponents and that is what we have to be able to do”, said Hafner. “We have to do a better job of that.”

Hafner believes added experience will help the Norse this season against the conference heavyweights.

Luther’s triple option attack has led the Iowa Conference in rushing in each of the past three years. But option teams typically struggle if they fall behind early and Hafner says that has happened too often against the top teams.

“We have to make sure that we have a level of consistency from the first snap to the last snap that allows us to stay in games.”

The Norse open at home on September 3 against Wisconsin-LaCrosse.