You are here: Home / News / Pence says ‘Iowa will lead the way’ in 2016 presidential election 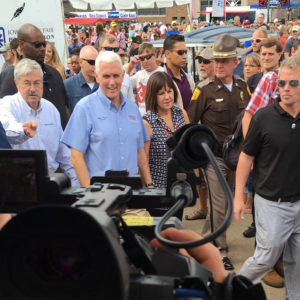 Pence first stopped by a private event with Iowa GOP heavy-hitters like Governor Branstad and agribusinessman Bruce Rastetter. Pence then walked into the public part of the fairgrounds, stopping by the Iowa GOP’s booth, stepping up on a platform and speaking for about a minute.

“Iowa always plays such an important role in the choice that America makes, but I know this fall Iowa will lead the way when we elect Donald Trump as the next president of the United States of America,” Pence said.

“Let’s all work our hearts out. It’s a little more than 80 days, but I know in my heart of hearts if all of us do all we can, we will elect leadership in America that will make America great again,” Pence said, to cheers. “Let’s go get it done.” 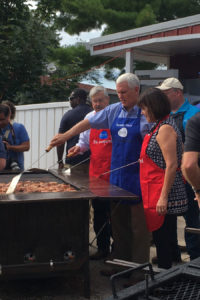 Pence bought a hot beef sundae at the Iowa Cattleman’s Quarters on the fairgrounds, took a selfie with Governor Branstad in front of the butter cow and flipped chops on the Iowa Pork Producers’ grill.

A person dressed as a duck trailed Pence to the pork tent, followed by others holding signs saying “Donald Ducks Releasing His Taxes.”

People nearby holding Trump-Pence signs chanted “Lock Her Up” — the same refrain heard when speakers at the Republican National Convention mentioned Hillary Clinton.

Pence was greeted by chants of his first name when he entered the fair’s Varied Industries Building. Later, as Pcnce visited with pork producers a few people on a nearby sidewalk booed and one yelled: “Hillary Clinton for President.” That prompted another round of the “Lock Her Up” chant.

Earlier this afternoon, former Iowa Governor Tom Vilsack held a news conference to call on Trump to “follow 40 years of precedent” and release his tax returns.