You are here: Home / Agriculture / Report: STEM students more likely to want to work in Iowa as adults (AUDIO) 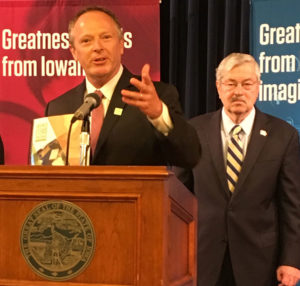 A new report shows students who participate in Science Technology Engineering and Math or STEM projects in their schools score better on tests and are more interested in working in Iowa once they graduate.

“Over half of the children of the state have now participated in one or more of these STEM programs, so we’re really at an interesting tipping point,” says Jeff Weld, executive director of the Governor’s STEM Advisory Council. “And I think we’re beginning to prove the concept here, that we’re going to provide a talent pipeline for the IT, agriculture, medicine, engineering, advanced manufacturing pipeline as a result of the work that we’re doing here.”

The State of Iowa began spending money on STEM programs five years ago. Back then, only one out of four Iowans knew STEM stood for Science, Technology, Engineering and Math. Now, nine out of 10 Iowans say STEM education should be a priority, but only 46 percent think it is in their local school. Governor Terry Branstad says sometimes it takes a while for perception to catch up with reality.

“It really is phenomenal, the change that we’ve seen in five years, but we know we still have a ways to go and we want to continue to work on it,” Branstad says.

Branstad has set a goal of getting 70 percent of working-age Iowans to have at least two additional years of college or vocational training beyond high school by the year 2025. 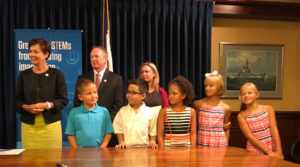 “‘Greatness STEMS from Iowans’ — our brand that we have — we are hearing more and more people tell us that, you know, they recognize it at STEM festivals that we’ve having across the state, STEM Day at the State Fair, so I mean it’s building and growing and we’re working on really driving public awareness and getting more parents and grandparents involved, so we’ve made a lot of progress,” Reynolds says. “We’re just admitting that there’s more work to do.”

Heather Anderson, a second grade teacher in Waukee, is also a Des Moines School Board member. She had her students collaborate on a science project last year.

“STEM, it’s a very important piece of the puzzle that can’t be taken out,” Anderson says. “It needs to be the foundation.”

According to the report released today by the governor, students who participated in STEM projects scored an average seven percentage points higher on the Iowa Assessments in mathematics, six percent higher in science and four percent higher in reading than their peers. Among the STEM “Scale-Up Program” participants, 45 percent of them said they were “very interested” in working in Iowa someday. That compared to 39 percent of all students who said they wanted to work in Iowa when they became adults.

AUDIO of Branstad’s weekly news conference, where the report was released