You are here: Home / Military / Questions raised about number of orders lowering the U.S. flag 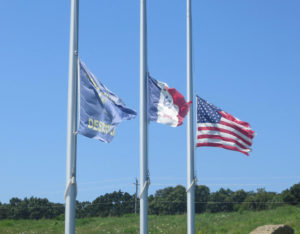 From the Iowa State Capitol to your neighborhood bank to private homes, the U.S. flag is being displayed at half-staff more often now than at any other time in history.

Bill Gartner is in charge of the crew that raises and lowers the flags atop the state capitol. Gartner, a Vietnam veteran, wonders whether seeing a flag at half-staff is losing its impact, as it’s become so common.

The national symbol has become a reflection of a troubled world; fallen soldiers and police officers, terrorism and mass shootings. A USA Today review found President Obama has signed a record number of proclamations to mourn tragedies at home and abroad.

An Iowa native from Glidden is known as the “Flag Guru.” Mike Buss is at the American Legion headquarters in Indianapolis. “We’ve done it so often that really it’s lost its meaning,” Buss says. “I wouldn’t be surprised if we get a resolution from our membership to, I hate to say tighten up, but make it more important as to when the flag is at half-staff.”

When the U.S. Flag Code was adopted in World War Two, casualties did not lower the flag, as Memorial Day is already set aside for those who died in military service. If a proclamation was issued for the funeral of every Iowan killed in Vietnam, the flag would have stayed at half-staff for more than two years, according to Colonel Greg Hapgood, spokesman for the Iowa National Guard.

Hapgood says, “It’s important that half-staffing is used judiciously so the solemnity of whatever that event is, is maintained and the respect of the nation is focused on that flag and that event or those people.” Just when to reset the flag is also confusing. In Iowa, and even the nation’s capital, the colors sometime are at half-staff when they shouldn’t be.

For guidance on presidential proclamations, you can sign up for email alerts on the American Legion website: www.legion.org.