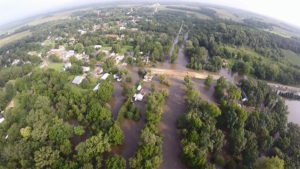 The governor’s proclamation allows state resources to be utilized to help communities recover. The help will be needed as the Iowa Department of Natural Resources has received report about six city wastewater treatment plants that have been hit by flood waters.  They are working with plants in Protivin, Elma, Decorah/Freeport, Fort Atkinson, Waucoma and Riceville.

Clark Ott in the DNR’s Manchester office says other plants had to take steps to deal with the massive amounts of water. “Some of the places have just had so much water that they just had to bypass the plant. But there’s these other ones that have been just completely or partially inundated by the floods themselves,” Ott says. He says the plant shutdowns could cause problems for homeowners.

“If the water can’t get down to the sewer plant it is just going to keep working its way up to the lines until it enters people’s residences,” Ott says. “And the other problem is the untreated water that’s leaving — but there’s such a large amount that the dilution factor is pretty great.” While the sewage that’s being released into waterways is diluted by a large volume of water it can still pose a danger.

He says that is why they tell people to not get into floodwaters, because of all the materials in the water. Ott says the cities have to wait for the water to recede from the plants, and then it can still take some time to get them working again.

“It can be a little bit a problem of getting them going again because most of these plants have bacteria that break down the sewage. And with the floodwaters, most of that has all been washed away. So they have to get all of their media going again and that can take several months so that they can get proper treatment again,” Ott explains. He says this flooding happened quickly and has been at levels of some of the other big events he’s seen.

“The floods of 2008 were right up there, they took out a lot of plants. I checked out the Elgin ones and Claremont ones during that one,” he says. “There’s been other floods and it depends on the watershed you look at whether it impacts cities or not. The ’91 flood was really big for one watershed, but it didn’t really affect many towns. It took out rocks and cliffs and bluffs in the Clayton County area.”

DNR crews will be back out today examining flood damage and he says there’s a possibility some other plants could be inundated as the water moves downstream.