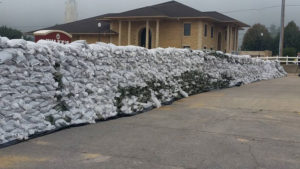 The Elkader community is recovering as floodwaters recede in the city.

The Turkey River crested at just over 22-and-a-half feet on Friday morning, making it the fourth worst flood in the city’s history. Elkader Mayor Josh Pope says the initial warning from the experts came a couple of days before the water arrived.

“It was a lot lower than what later they predicted, so we prepared for that and then when they announced that it was going to be much higher than our levee wall would withstand, we then prepared for the worst,” Pope says. “We had to protect our downtown area. Friday morning when we got word from the National Weather Service in La Crosse that it was only going to crest at 22.5 feet, which we were more than prepared for.”

The crest was five feet below the record Turkey River crest in Elkader, which happened in 2008. Pope says his city still saw some major flooding this past week.

“We always have some flooding in our lower end where our city park is, which is also our city campground, over into the (high school) football field area which seemed to have gone, now, down,” Pope says. “It looks pretty good. Hopefully we can play Friday night. I don’t know if it will be good spongy or not.”

Pope says water did seep into the basements of a lot of the businesses on the “river side” of Elkader.

“But it was minimal and it was fairly clean water,” Pope says. “…Firemen went down and helped with the pumper truck and pumped clean water in to try help them to push some of that out, so it’s looking real good down there.”

Elkader’s mayor says he has a long list of folks to thank for coming to the aid of flood victims and for helping fill thousands of sandbags.

“The many, many, many volunteers that we had brought that machinery in, that brought shovels and the kids from the high school,” Pope says. “The school let out early and they all marched down, along with the administration. The superintendent and the principal were right in that sand pile also, so great effort from all of the community.”

Meanwhile in Garber, the Turkey River crested at 23.6 feet on Friday night. Both towns saw the river fall below flood stage throughout the day on Saturday.