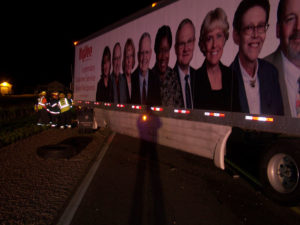 Firefighters at the scene of the accident near Le Mars.

One person was killed when a semi and car collided head-on late Sunday night in northwest Iowa.

The crash happened around 11:30 p.m. on Highway 3 about two miles east of Le Mars. The driver of the car, who was killed in the crash, has been identified as Donna Wynn of Sioux City. She was traveling westbound on Highway 3 when her 2011 Honda CRV collided with a semi that was eastbound.

The driver of the semi, Jason Ducommun of Larrabee, suffered minor injuries. Ducommun is a contracted driver for Hy-Vee. He was hauling an empty trailer to the Hy Vee warehouse in Cherokee at the time of the crash.

Wynn was a long-time teacher in the Sioux City Schools system. She retired in 2011 and was honored as Iowa’s History Teacher of the Year in 2009 by the Iowa Department of Education.