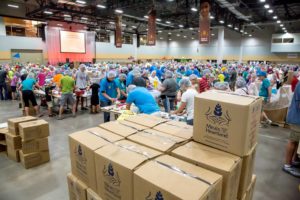 One of the biggest annual volunteer efforts in the country is going on right now in central Iowa. This is the ninth year for the Meals From The Heartland “Hunger Fight” and it involves volunteers packaging millions of meals for poor and malnourished people around the world.

Meals from the Heartland executive director Susan Bunz is hoping to set a production record over the four day event. “Last year, we did 4.2 million (meals) and we’re really hoping we can get to 5 million this year,” Bunz says.

The packaging started on Wednesday and will continue through 5 p.m. Saturday at Hy-Vee Hall in downtown Des Moines. There’s plenty of room for more volunteers to work two-hour shifts.

One reason Bunz is confident the goal can be reached is they’ve found a faster way to pack meals. “It used to be we always put 10 people to a table. We really don’t have to do that. We’ve found that people can effectively pack with seven at a table,” Bunz says. “Previously, we might have 11 or 12 who would come in and we’d put them all at one table. Now, we can split them up.”

Meals From the Heartland packages these meals year round, but this is the biggest packaging event of the year. “We did 15.7 million meals last year and a little over a million meals stayed in the United States, with the bulk of that staying in Iowa,” Bunz said. “The rest of it went to orphanages and schools in countries around the world.”