You are here: Home / News / Statue of Hayden Fry unveiled in Coralville 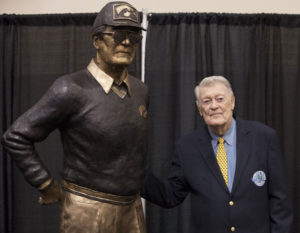 Former Iowa football coach Hayden Fry was on hand for the “big reveal” in Coralville today.

“I didn’t ever know that I looked that good,” Fry joked.

A statue of Fry as he looked standing along the sidelines in Kinnick Stadium was unveiled today.

“It’s a fantastic statue,” Fry said, laughing. “Slim and trim, in good shape because of the football and the Marine Corps.”

The 1979 season was Fry’s first at the University of Iowa. He told Hawkeye fans that if you stayed with the game long enough, “the worm is bound to turn” — and Fry guided the program to national prominence. He spent nearly 20 years at the school. His statue will be placed on First Avenue in Coralville, in front of the Visitors and Convention Bureau for Iowa City and Coralville.

“A great tribute to my coaching staff through the years, the players, the fans,” Fry said today.

University of Iowa president Bruce Harreld was on hand for today’s ceremony.

“Just watching him gaze at that statue that’s going to be in our community memorializing all he’s done,” Harreld said. “He, in many ways, brought back winning and the winning attitude to the University of Iowa and all the citizens of the state.”

Harreld and Fry made their comments in video posted on the twitter account for The Iowa Hawkeyes.

Fry, who is 87, was inducted in the College Football Hall of Fame in 2003. Fry coached at SMU and North Texas State before he was hired to guide the Hawkeye program. His lifetime coaching record was 232 wins, 178 losses and 10 ties.