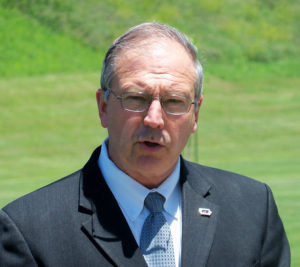 “Every day that we delay is a day that we depreciate the value of the agreement,” Hill says. “It’s a multilateral, comprehensive trade agreement. It includes 12 countries which brings net farm income to the positive by about $4.4 billion a year.”

“But we’re hopeful. We’re working on it every day. It’s important to America. It’s important to the world,” Hill says. “And after we get this one done, TTIP — which is the European trade deal — could be executed upon. It’s being negotiated now, but we can’t do that until we get TPP.”

The Trans Pacific Partnership involves a dozen countries with a border that touches the Pacific Ocean. Farm groups say the deal would stop countries from using “non-scientific” reasons for barring the import of U.S. commodities, like corn and soybeans as well as pork, beef and dairy products.