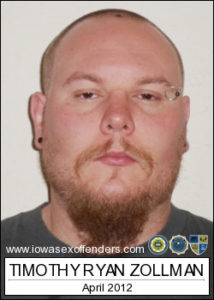 An Decatur County man is sentenced to 120 years in prison on child pornography charges.

Court documents say 31-year-old Timothy Ryan Zollman of Van Wert sexually assaulted and exploited ten young girls and recorded the assaults. He was convicted of two counts of producing child pornography. The sentence for Zollman was enhanced because he committed the crimes while already listed on the state sex offender registry.

U.S. Attorney Keven Vanderschel says the evidence shows that Zollman is “a dangerous predator” and the 120-year sentence is necessary “to protect the public and other potential victims.”

The sentence also ordered that Zollman be under lifetime supervision following his release, though it is unlikely he will ever get out of prison.

The case was prosecuted by the United States Attorney’s Office for the Southern District of Iowa as part of the United States Department of Justice’s “Project Safe Child” initiative, which was started in 2006 as a nationwide effort to combine law enforcement investigations and prosecutions, community action, and public awareness in order to reduce the incidence of sexual exploitation of children.