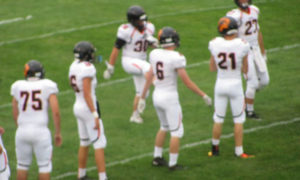 Officials with the Carroll school district say a gay student who was nominated to the homecoming court got a threatening group text from several Carroll High football players.

Superintendent Rob Cordes says the text told the student to commit suicide or he would die if he didn’t remove himself from the court.

“Obviously, it’s very disappointing and upsetting that those types of comments would be made towards anyone,” Cordes says. “It’s just a very unfortunate mistake made by some students that certainly has provided a black eye to themselves, the school, the district, certainly the football program.”

Someone printed off the exchange and left it on a coach’s windshield. Cordes says this falls under the school’s anti-bullying and anti-harassment policy. The administration is still gathering information, but as yet, no one involved has faced any consequences. He says the types of punishment the students could face is broad.

“It depends on all of the circumstances that come to light in the investigation,” Cordes says. “There could be a whole range of discipline from warnings to detention to suspension to whatever. What this will entail, I don’t know.” Though only a few students were involved in the group messaging, Cordes said district staff members are working together to come up with ways to educate the entire student body about tolerance and acceptance. Cordes says district officials have talked with the victim.

“One thing the person would like to see is that people learn from this and learn more about the LGBT community and what it really is all about,” he says. “I think there is a lot of misinformation out there. We may look at some type of assembly or having someone come in.” He says everyone, not just those involved, needs to take a lesson away from this incident.

“Kids are going to make mistakes, unfortunately, this was a big mistake, a silly mistake, a stupid mistake,” Cordes says. “I’m sure they are extremely regretful now but they can’t unring the bell.” Cordes said students, parents or guardians with concerns should contact the Carroll High School principal, Tammie McKenzie.