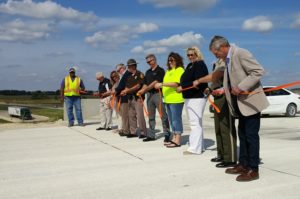 An expensive project to remove a dangerous intersection in northeast Iowa is nearing completion.

The former Black Hawk County Road C-57 intersection with Highway 218 was the scene of many traffic crashes, resulting in injuries and death.

Black Hawk County Sheriff Tony Thompson launched the push for an interchange back in 2011. “In my eight years as sheriff, we saw a lot of accidents — 70 some accidents out there. That’s way too many,” Thompson said. A ribbon cutting ceremony was held Thursday for an interchange above Highway 218, which should be open to traffic in early October. A portion of the county road has been closed for nearly two years as the overpass was being built.

An average of 20,000 vehicles per day travel the stretch of Highway 218 between Cedar Falls and Waverly. “To put that in perspective, Mason City on I-35 only experiences 17,000 cars per day,” Thompson said. “So, 20,000 cars per days is a remarkable number.”

The Iowa Department of Transportation reports the project came in under budget at $14.4 million. Thompson says it’s money well spent. “When we look at what we have now…20,000 cars per day…by 2040, they’re talking about 40,000 cars per day,” Thompson said. “So, we know this was the right investment. We know it was hard to do and expensive to do, but we know…it was the right thing to do and we’re already saving lives because of it.”