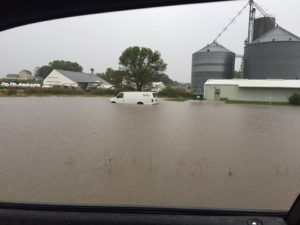 A vehicle swamped by flooding from the Fayette County Sheriff’s Facebook page.

Two pickups driving in torrential rain were damaged by one tree on a rural road last night.

At about 9:30 pm Wednesday, the Fayette County Sheriff received a report of a tree that had fallen in a road just northwest of West Union. Deputies and county conservation workers were at the scene, trying to remove the tree, when a pickup driven by 26-year-old Trent Woltzen of West Union, hit the tree.

Woltzen wasn’t hurt, but there was $3,000 damage to his truck. He told authorities he could not see the tree in the road because of the heavy rain and high winds.

A short time later, a truck driven by 34-year-old Jason Cannon of Hawkeye ran over the same tree before it could be removed. He was also unable to see the downed tree in the road due to the wind and rain. Cannon was not injured, but his truck sustained $8,000 in damage.

With the help of nearby residents, authorities eventually were able to remove the tree from the road Wednesday night.