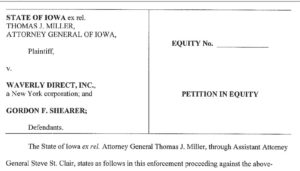 “First of all they would send a mailing out to Iowans that we regarded as deceptive. The mailing was from the Director of the Numerology Resource Center making various promises about the special selection of the recipient and the various benefits that the center was going to be delivering and so forth,” St. Clair says. He says the letter asked the recipient to send the center a $20 handling fee.

“We’re alleging that these defendants would take and make a list of everybody who responded by sending 20 dollars, and then take that list and market it to other entities — who in our view were just simply looking for vulnerable people to exploit,” St. Clair says. He says that violates the Consumer Fraud Act. The other lawsuit was filed against Nicholas Valenti and his various companies.

“Valenti is out of Las Vegas and our allegations against Mr. Valenti and his operations were that he would send out what we regard as deceptive mailings,” St. Clair explains, “this time focusing primarily on formulas, selling formulas and systems for winning the lottery or being able to win in other sorts of gambling activities. And win big and win consistently.” He says the mailings claims you purchase the formulas and use them to win large amounts of money.

“We regarded his statements, representations and his mailings as again violating the consumer fraud act,” St. Clair says. “And so we are seeking a range of remedies from Mr. Valenti and his operations as well.” The new lawsuits come as the AG’s office reached a settlement in a similar case involving Macromark Incorporated of Danbury, Connecticut.

“Macromark is a list broker — that is it handles various lead lists, lists of consumers so that different sorts of marketing enterprises can rent in effect from Macromark a list of consumers who are prospective customers,” St. Clair explains. He says they had alleged that the company knew the lists were not going to be used legitimately.

“Macromark had enough information about who was renting its lists and how those lists were being created to know that in effect it was dealing in what some of the scammers might think of as sucker lists,” St. Clair says. The settlement, called an assurance of voluntary compliance, says the company will stop targeting Iowans.

“Ultimately the company agreed to refrain from the activities in question…and also agreed to make a payment of $30,000 to permit us to enforce effectively the Consumer Fraud Act in going forward,” St. Clair says. He says the mailings from all three companies often targeted the elderly in efforts to convince them to send in money.