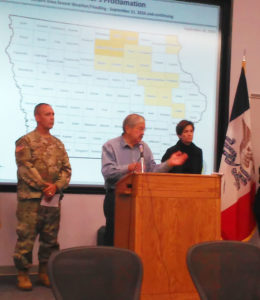 Governor Terry Branstad gives an update on the flooding.

Governor Terry Branstad has declared four more counties disaster areas due to flooding and Branstad says it’s likely damage to public facilities will reach levels that qualify for federal disaster assistance. There are no state highways underwater, but local roads are.

“I would say we saw firsthand in Butler County considerable damage and we expect, as the assessments come in, that there will be county roads and farm-to-market roads in particular that are facing considerable damage,” Branstad said this morning.

Cerro Gordo, Hancock, Mitchell and Worth Counties are now part of a 17-county zone Branstad that has declared a disaster area. Disaster assessment teams are in some areas of northeast Iowa where flood waters have receded to assess damage to public and private property.

Branstad saw water over roads in Clarksville over the weekend and he toured damage in Shell Rock. “Fortunately they didn’t have to close a new bridge that was built in Shell Rock in 2011. It came very close,” Branstad said this morning. “…That was about the only route through that area because all the rest of the roads were closed and, fortunately, the water is starting to recede in that area.” 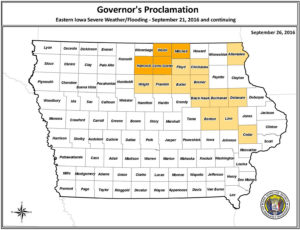 “Interstate 80 is what we’re monitoring right now,” Iowa DOT director Paul Trombino said today. “We have had some impacts there in the past and we won’t know, probably until first thing Wednesday morning because it seems like the flow has slowed down a little bit, but the flow is also dropping a little bit, so that’s good news.”

The Cedar River and Interstate-80 intersect in Cedar County, east of the Iowa City area.

“Where the water tends to move into the ditches along the sides of the route and then will creep into the roadway, so the bridge is not of concern,” Trombino said. “It’s the water as it moves up and tends to move up and get into the shoulders and then, potentially, into the lane.”

The Iowa National Guard has flown over the Cedar River corridor to get an aerial view that shows the extent of flood damage.