You are here: Home / Fires/Accidents/Disasters / Thousands of Cedar Rapids residents in flood zone asked to evacuate 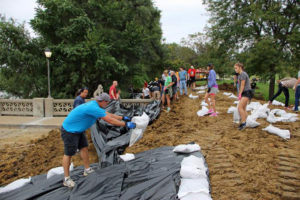 Officials in Iowa’s second-largest city are urging thousands of residents to take only what they need and get out as the flooding Cedar River continues to rise to near-record levels.

Greg Buelow , Cedar Rapids’ public safety communications coordinator, says they’re requesting people who live and work in about 5,000 homes and businesses along the waterway to evacuate.

“We are concerned when it gets above major flood stage and we’re above the 16-foot level, we’re already pushing past 18-foot and it’s supposed to crest at 23-foot,” Buelow says. “We do have temporary flood protection measures in place but they’re no guarantee of anyone’s safety so we are strongly encouraging people to evacuate.” 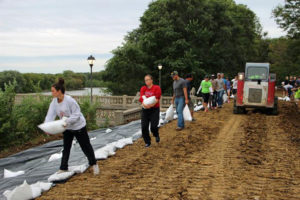 Volunteers have worked for hours preparing for the flood in Cedar Rapids.

The crest is expected at Cedar Rapids tomorrow morning and only about half of the residents who were asked to leave have actually left.

“We sent out a wireless emergency notification system (warning) twice yesterday, made several pleas for people to evacuate,” Buelow says. “We certainly just don’t want people to be trapped in their homes. Water can rise quickly, especially if one of those flood protection measures would happen to fail.”

The evacuation is not mandatory but those who stay behind are being asked by authorities to provide information on their next of kin. A curfew was enacted for the first time Sunday night for the flood zone area. “The curfew goes into effect each night at 8 o’clock and ends at 7 a.m.,” Buelow says. “Really, the area is restricted. If you don’t live there, you can’t get in, and quite frankly, when it gets to the point where it’s not safe, nobody will be allowed to reenter the flood evacuation zone areas.”

Over the weekend, volunteers poured into Cedar Rapids from all over Iowa to help fill sandbags to prepare for the community’s second “hundred year” flood in less than a decade. 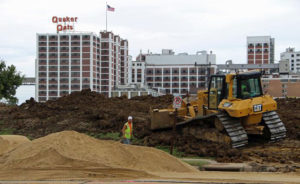 A dozer works on the flood wall in Cedar Rapids.

“We are very proud of fact of all the work this community, employees and contractors have done to build these flood protection measures, the levees and the HESCO barriers and putting them up, the miles of them along the river,” Buelow says. “It’s been an admirable effort. It’s been four days of very intense work around the clock.”

The river is expected to crest at 23-feet and the barriers should hold back the floodwaters up to 26-feet, but Beulow says there’s not really any sense of security. “You hope they work but at the end of the day, there are no guarantees that they will with the power of water,” Buelow says. “We’re already up to 66,000 cubic feet per second pumping through the Cedar River where normally, it’s at about 9 miles an hour or maybe 15,000 cubic feet per second.”

During the city’s worst-ever flooding in 2008, the river flow topped 100,000 cubic feet per second. For people who’d like to help the community, Buelow says donations should be directed either to the American Red Cross or the United Way of East-Central Iowa.