You are here: Home / Fires/Accidents/Disasters / Some Cedar Rapids residents returning to their homes 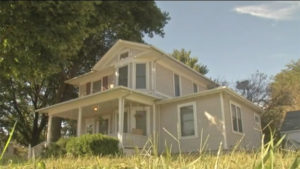 The Cedar River crested around 22 feet Tuesday morning in Cedar Rapids and is not expected to drop below 20 feet until Thursday.

Some residents who evacuated have gone back to their homes. Cathy Burns told KCRG TV that she never expected to return to her historic home this soon.

“We came first to check the water situation to see what the basement was like,” Burns said. She was pleasantly surprised when no water was found in her home, and her family could take back a first round of furniture. Her family moved a lot of items out and was preparing for a flood like the one in 2008. That flood destroyed the home, and forced a complete renovation.

Burns certainly didn’t want to risk losing her home again, especially since the 1913 Sears Catalog Home was ordered by her parents. It’s the house Burns lived in, a majority of her life.

“Oh my gosh I grew up in this house. I left for several years when I was married and so forth — came back in 1991 to take care of my mother, ” Burns said. She said she enjoys the bay windows, the front porch and its swing. Scott Licht stayed with his house and is happy the water didn’t reach it, but told KCRG TV that “We’ve got at least three more days that we’ve got to worry about the sewer stuff coming up…the sewer is biggest worry I think right now,” according to Licht.

Data from the National Weather Service indicates the river dropped to 21.19 feet as of 7 a.m. from Tuesday morning’s crest of just under 22 feet. The NWS also said the river is expected to be back under flood stage of 12 feet on Sunday, a day earlier than previously forecast.