You are here: Home / News / Celtic Thunder to make an appearance in Iowa 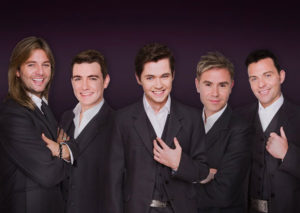 Central Iowans are getting a Saint Patrick’s Day present several months early as a five-man Irish vocal group from Dublin will make one stop in the state this weekend.

Going back to old songs like ‘Danny Boy’ right up to modern songs like maybe a song that U2 would have sung or a song like ‘Falling Slowly’ and everything in between,” Cahill says. “We’re a band with five guys and we all have different styles, we’re different types of singers. We come together as a group, as an ensemble, to create the Celtic Thunder sound.”

The band formed in 2007 and has won Billboard’s top World Music Artist Award four times. The 25-year-old Cahill hopes this October show will be a welcome treat, as many Iowans only hear this type of live music in March around Saint Patrick’s Day.

“Since I started coming to tour in America, it’s almost a bigger deal here than it is in Ireland,” Cahill says. “We’re very lucky, the Irish people, that we have a whole day dedicated to our culture somewhere so busy and vast as America.” The five vocalists are backed by an eight-piece live band. They’ve played the White House and opened St. Patrick’s Day parades across the United States. Cahill says the familiar old Irish songs offer more than nostalgia and they’re still relevant today.

“We’ve a very colored history in Ireland, as many people know, and many of the Irish emigrated and that helped spread Irish culture all over the world,” Cahill says. “I sing songs like that which, I suppose, remind people of the homeland, the people that love to go back to Ireland and visit it again. It’s nice to be able to bring the songs from home all over the world.”

Celtic Thunder will perform Saturday night in Des Moines. Sunday’s show in Cedar Rapids has been postponed due to flooding. No new date has been announced.