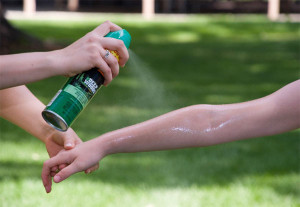 The Iowa Department of Public Health is reminding you to remember to protect yourself against mosquitoes if you are out taking advantage of the remaining warm fall days.

Deputy State Epidemiologist Ann Garvey says one threat in particular is still looming. “Late summer and early fall through October is really the peak time when we see West Nile transmission,” Garvey says. ” I think that a lot of us are pretty cognizant and throw in the sunscreen and throw in the bug repellent in the summer months. But as we get into the fall, sometimes we forget that.”

Doctor Garvey says you should remember the key times of the day when the mosquitoes are active. “Mosquitoes here in Iowa that transmit West Nile Virus are most active from really the dusk ’til dawn hours. And so again — it’s important to wear repellent — especially during those hours,” Garvey says. Garvey says the West Nile carrying mosquitoes like stagnant water to breed in, so it is important to dump out standing water.

There’s been a lot of water in some areas due to flooding, but she says that doesn’t mean the population of West Nile mosquitoes has dramatically increased. “Generally speaking when we have flooding events we tend to see what we call flood water mosquitoes, which aren’t as good at transmitting diseases like West Nile virus,” Garvey explains. “But this time we are having kind of the peak West Nile season overlap with some of out flood events So, while a majority of those mosquitoes in flooding events will be floodwater mosquitoes, there will be some that are the likely types that can transmit West Nile Virus.”

She says there have been 15 human cases of West Nile confirmed and they are investigating several more which leads them to believe they will have more cases than last year. There are also cases of West Nile in horses and in mosquitoes caught in monitor traps, so Garvey says they know it is out there. Mosquitoes like the warm fall nights just like you do.

“Mosquitoes do really well in the 80-degree temperatures and above. And they do okay in the 70-degrees. Once we get kind of below the 60’s, it’s pretty cold for them and they often go dormant,” Garvey says. Doctor Garvey says the best repellent contains the chemical known as DEET, and says you should read the label before applying it to children.

West Nile can be fatal in some cases, and the last time that happened in Iowa was in 2010 when there were two deaths. For more information about West Nile virus, visit the Iowa Department of Public Health’s website.