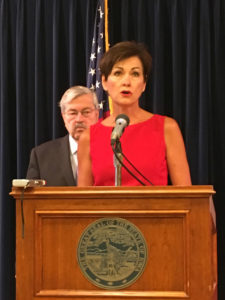 Lieutenant Governor Kim Reynolds is leading a small group of Iowans on a trade mission to Argentina and Uruguay. Argentina had been largely closed to outside investment and trade until this past December when a new president took office.

According to the Iowa Economic Development Authority, “this is an excellent time to begin exploring the market and establishing relationships” in Argentina.

This past week in Argentina government workers, teachers and hospital employees seeking pay hikes went on a 24-hour strike.

Things are more stable in Montevideo, Uruguay, the second stop for Reynolds and the Iowa entourage.

Iowa-based attorneys from two high-powered international law firms with Des Moines offices are part of the group, along with representatives of a metal-fabricating business in Iowa Falls and a Spirit Lake company that produces grain handling equipment. Iowa City-based ACT, Incorporated — the college admission testing service — also has a rep on the trip. ACT tests are administered in all 50 states and in 130 countries around the globe.

The group of Iowans is scheduled to return to Iowa on October 8.