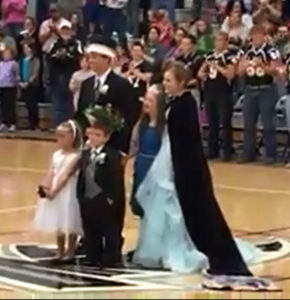 An Iowa high school’s homecoming queen shared her crown with a classmate late last week and by Sunday night video of the kind gesture had been viewed nearly 181,000 times on the internet.

During a school assembly on Thursday, Katie Gassman was crowned the homecoming queen for Wayne Community Schools in Corydon.

Gassman had passed a note to the adults in charge of the ceremony and asked that it be read if she won. The teacher who read it choked back emotion as she told the crowd what that note said: “Tonight I would like to share my crown with the girl who always has a smile on her face and has overcome so many hardships.”

That girl is Chelsea Sloan, who has Down Syndrome, kidney problems and arthritis — and she was part of the queen’s court, too. Chelsea’s mother was the one videotaping the scene and you can hear her surprised and pleased reaction to the announcement. The crowd in Corydon cheered as Chelsea stood between her school’s homecoming king and queen and posed for pictures, with the crown on her head.