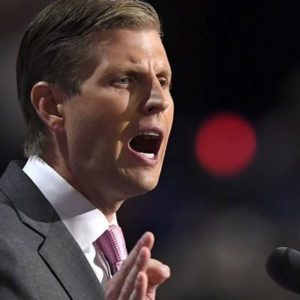 “He did such a great job,” Eric Trump said during an interview with Radio Iowa. “I think he represented my father so incredibly well. He represented the party so incredibly well and we were incredibly proud of him…I don’t think Governor Pence could have done any better. He was poised. He was articulate. He didn’t let the nonsense get to him.”

Eric Trump spoke by phone with Radio Iowa earlier this morning. He was sitting in the front row watching Mike Pence debate Democratic vice presidential nominee Tim Kaine last night. Kaine mentioned Eric and his brother twice on stage, charged there would be conflicts of interest in a Trump Administration due to the Trump organization’s ties to Russia.

“It’s really amazing, when I heard that question. First of all, we don’t have any assets in Russia and this is typical of the Hillary Clinton playbook, throw out every lie in the world and hope something sticks and it’s amazing. I don’t think I’ve personally been to Russia in six, seven, eight years. We have no properties there. We have no hotels there. We’ve have no buildings there. We’ve never done a deal there,” Eric Trump said this morning. “I think our greatest extent with Russia was having the Miss Universe Pageant there, you know, 10 years ago or a fairly long time ago.”

Kaine suggested during last night’s debate that Donald Trump hasn’t released his taxes because it would show “business dealings with Russia.” ABC News has reported Trump struck a business deal in Toronto with a Russian billionaire and sold condos in Florida to Russian citizens.

Eric Trump suggests the Clinton’s have conflicts of interest with Russia, too.

“Bill Clinton was in Moscow a dozen times giving speeches for $500,000. The US gave 20 percent of our uranium stockpile….to Russia,” Eric Trump said. “….Then three weeks later the Clinton Foundation gets $145 million from the business people who put that deal together.”

The Clinton campaign points to data indicating it wasn’t just the state department, but nine government agencies that  approved the uranium sale.

Now that the only vice presidential debate is over, attention shifts to this Sunday when Donald Trump and Hillary Clinton debate a second time. Eric Trump has this advice for his father: “I hope my father’s my father. My father’s an amazing man. He’s got a heart of gold. He’s a great guy and he’s doing this for the right reasons and that’s America’s going down the tubes under the watch of these politicians.”

“Iowa wants to see and America wants to see America back in prosperity and unfortunately that hasn’t been the case for a long period of time, so we’re doing to fix it,” Eric Trump said. “Iowa’s incredibly important to get us to that 270 number.”

Eric Trump spoke by phone with Radio Iowa just before 9 o’clock Iowa time. Two top Democratic surrogates are campaigning in Iowa today for Hillary Clinton. Bernie Sanders is headlining a rally at Drake University this morning and Chelsea Clinton is campaigning in Dubuque and Sioux City.

Eric Trump began by telling Radio Iowa he was sitting in the front row at last night’s debate. Hear that here: AUDIO1

First question: Was there a point last night when you wished you were on stage, speaking for your father?  Eric Trump’s answer: AUDIO2

Second question: You were mentioned twice by Senator Kaine on stage last night, as he made the charge there would be conflicts of interest in a Trump Administration due to Trump Organization ties to Russia. We all know what Governor Pence said. How would you have answered that? Eric Trump’s answer: AUDIO3

Third question: There’s another big debate this Sunday. What do you hope your father accomplishes there? Eric Trump’s answer: AUDIO4

Fourth question: What role does Iowa play in your father’s march to 270 vote in the Electoral College? Eric Trump’s answer: AUDIO5

Final question: You spoke by phone with your father right after last night’s debate. What did he tell you that he didn’t say on Twitter? Eric Trump’s answer: AUDIO7