You are here: Home / Sports / IIAC lead on the line when Coe visits Dubuque 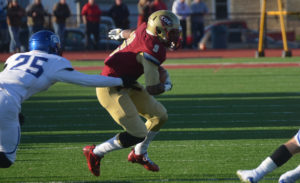 Homecoming at the University of Dubuque will have added buzz this weekend when the Spartans host Coe College in a key Iowa Conference football game. Both teams are 6-0 and nationally ranked. Dubuque is 16th in the latest Division III Coaches Poll and Coe is 23rd. The winner will have sole possession of the conference lead and own the tie breaker with three games remaining.

“It isn’t the conference championship game but it will put yourself in a position where you can stumble and still win the league title”, said Dubuque coach Stan Zweifel.

“I’m young”, said Staker. “I am only 33 and my heart can’t take this. We have found ways to win football games late and I think that builds confidence for your team when you are able to do that. The fans have gotten their moneys worth there is no doubt about that.”

Dubuque has combined an explosive offense with a big play defense. The Spartans lead the Iowa Conference in passing and the defense has forced 20 turnovers, including a league high 14 interceptions.

“I think that really ties into what the strength of our football team is”, added Zweifel. We are just very athletic and have a lot of speed.”

Coe leads the league in total offense, including a run game that averages just over 261 yards per game.