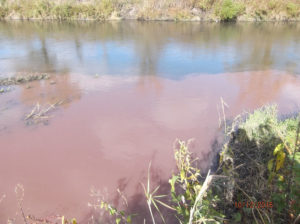 The Iowa Department of Natural Resources has found the source of runoff that caused the water in Bear Creek to turn red west of Larrabee in northern Cherokee County.

The DNR’s Tom Roos says it was traced to a feedlot. “We found a field that had been recently applied with cattle manure from an earthen basin that had flowed off a field down a waterway and into Bear Creek,” Roos says.

He says the cattle feedlot is owned by Nathan Tentinger of Tentinger Farms.   The Cherokee County Sheriff’s office reported the stream contamination Wednesday afternoon after it was noticed that the runoff turned the water red in Bear Creek as it ran down to Mill Creek.

“I would say the plume was about a mile long of red water,” Roos says. He says the red plume is probably due to whatever was in the cattle lot basin. 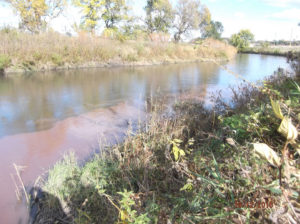 “Each cattle lot has a little bit of a different color to them…but it definitely matched the color of the water that was in the basin,” according to Roos. He says no dead fish were found and that could be because the Bear Creek ran into Mill Creek.

“Both streams are extremely high right now — so it definitely helped the dilution,” Roos says. Roos says this is an example of why producers need to be careful about spreading manure, especially when there are wet conditions in fields.

“It’s important that those producers pay close attention to those pumps and irrigation at this time of year, because if you leave it unattended, things like this can happen,” Roos says. He says the DNR will consider any appropriate enforcement action once it wraps up its investigation.