You are here: Home / Health / Medicine / Permanent Rx drop-off sites to be established in 42 more counties 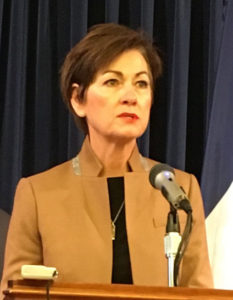 State officials hope to create one permanent “Take Back” site for unused prescription drugs in every Iowa county by January. There are currently permanent sites for proper dumping of unused or out-dated medications in just 57 of Iowa’s 99 counties.

Lieutenant Governor Kim Reynolds says more kiosks are being placed in police and sheriff’s offices as well as community pharmacies.

“Prescribers have a key role to play to ensure medicines are used wisely, but so do all of us who, as patients, become responsible for the medications once they’re in our possession,” Reynolds says. “The ‘Take Back’ program helps Iowans be part of the solution by preventing prescription drug abuse.”

“You what they say about this,” Reynolds says. “An ounce of prevention is worth a pound of cure.”

This Saturday, October 22, is National Prescription Drug Take Back Day. This past April, during a similar event, Iowans returned 4.5 tons of unused and obsolete prescription drugs in just four hours.

“That’s tremendous progress by Iowans, but with pharmacies dispensing more than 300 million doses of controlled prescription drugs, those with higher abuse potential statewide last year, there’s still a lot of work that needs to be done,” Reynolds says.

The Governor’s Office of Drug Control Policy website has a list of the permanent prescription drug drop off sites, as well as the 100 locations for this Saturday’s event.