You are here: Home / Sports / Farley says Panthers must win out to earn playoff bid 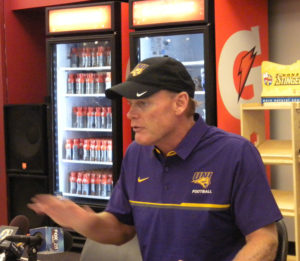 Northern Iowa coach Mark Farley says the margin for error is gone. The Panthers are 2-4 after faltering in the fourth quarter of another game in a 14-10 loss at Youngstown State and will need to win their final five games to get a spot in the FCS playoffs.

UNI’s four losses have been by a total of 17 points and three of them have been top teams ranked in the FCS top ten.

“We have to win out”, said Farley. “I don’t think there is any doubt out that. I think the magic number with our schedule is seven and I don’t think that is a surprise.”

That makes this week’s game at home against Missouri State a must win. The Panthers have not lost to Missouri State since 2005 but Farley says at 3-3 the Bears are an improved team.