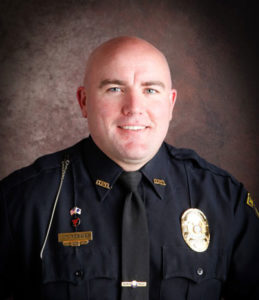 Jay Perkins, a reserve officer with the Oelwein Police Department, posted the picture of himself, which makes it appear that he is relieving himself on a Clinton/Kaine political yard sign.  Perkins had his pants pulled down, and also appeared to have a gun in one hand, pointed at the sign.

The reserve officer was not wearing his uniform, and was not on duty at the time. The photo was posted on his Facebook page last week, but taken down a short time later. Oelwein Police Chief Jeremy Logan noted in an email to the Oelwein Daily Register newspaper, that officers do have the freedom of expression and speech, but they are also urged to use professional behavior, even when they are not in uniform.

The chief also remarked that Perkins has been a dedicated officer, and the incident does not reflect what the department has witnessed in recent years.  The photo has gained national attention as the race for the presidency continues.