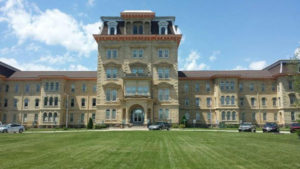 The union representing a majority of state workers is blaming “inappropriate staffing levels” for recent incidents at the Independence Mental Health Institute where a patient injured three staff members.

Two of the workers required a trip to a hospital emergency room, according to a news release from AFSCME Council 61. The Department of Human Services has oversight of the state’s two mental health institutes.

DHS spokesperson Amy McCoy says while she’s not aware of any staffing shortages in Independence, workers know there are risks with direct care of patients. “Unfortunately, from time to time at the facilities, assaults do happen where patients who have psychiatric diagnoses may have some behavioral issues and act out,” McCoy said.

AFSCME Council 61 president Danny Homan is also questioning the placement of the patient at the Independence MHI due the man’s history of violent behavior. McCoy admits “some very difficult individuals” do get placed at the MHIs.

“We are always trying to make sure that we have policies and procedures in place that can best protect our staff,” McCoy said. “The safety of the patients and our staff is our highest priority.” McCoy said she did not know details about the incidents at the Independence MHI.

“I was deeply concerned to hear about two separate incidents of staff being seriously injured by the same patient at the Independence Mental Health Institute over the past two weeks. The first incident resulted in two staff members being rushed to the emergency room; the second resulted in injuries simply due to the fact that insufficient staff was available to respond and assist the staff member while she was being assaulted.

“The issue of understaffing permeates too many of our state facilities. Whether prisons, mental health institutes, or resource centers, putting staff in harm’s way simply because we are continually understaffed is unacceptable.

“Appropriate placement has also been a continuing issue at our mental health institutes and resource centers. The patient who attacked multiple staff at Independence MHI was transferred from a private facility who was no longer able to handle his violent behavior. There should have been a period of consideration by the state to determine whether or not his behavior pattern could be appropriately handled at Independence MHI, given their staff shortages.

“Another ongoing concern regarding placement is the convicted rapist at Woodward Resource Center, who has been threatening another attack since his transfer to the facility in August. There is no doubt that the Woodward Resource Center is an unsafe place for a violent sexual predator to reside. For the sake of the staff, his fellow residents with intellectual and developmental disabilities, and the public, we have to make more responsible placement decisions.”