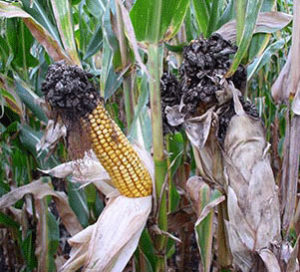 Iowa State University experts are getting some calls with concerns about mold as the harvest continues across Iowa. Iowa State Extension and Outreach beef specialist Chris Clark says producers are worried about how the mold might impact grain quality.

“Asking about corn mold and corn smut and stuff like that. It’s a little tough to now exactly what those molds are just based on the description over the phone,” Clark says. “Most of them sound like they are probably corn smut, which is a pretty benign condition.” He says there’s a concern that mycotoxins will get into the corn and make it not fit to feed to animals or for other uses. Clark says corn smut isn’t an issue.

“It doesn’t really make mycotoxins, it shouldn’t cause any significant risk really to cattle or other livestock if the grain is fed. It can be a little bit of a respiratory irritant to farmers, so they want to wear a respiratory mask when they’re harvesting,” according to Clark. The smut is a black-colored glob that looks sort of like a mushroom growing on the corn ear. While it’s not a worry, it’s not the only thing being found in the fields.

“We have seen some reports of some other fungal infections of the corn that can cause mycotoxins in Iowa and some surrounding states,” Clark says. He says he’s also heard about what’s called alternariu, which is another benign organism that causes a black dust on the corn. Clark says it is proper to be looking for mycotoxins.

“And actually some of the molds we don’t really have a fantastic handle on what conditions promote its growth…it’s very much environmental, it has to do with temperature and moisture,” Clark says. “Sometimes it’s drought followed by moisture. Sometimes it’s a wet period during a specific time of plant development. Afflatoxin for instance, kind of likes high humidity and grain moisture.” Clark’s best advice is to check out your corn before harvest to see what is happening.

“That’s really the way to go. Kind of scout it out – see what you’ve got — not only on the corn plant, but right on the ears, right in the kernels,” Clark explains. He says the Iowa State University Veterinary Diagnostic Laboratory (VDL) does a good job of identifying molds and other issues with grain. The VDL offers a mycotoxin screening of grain and feed samples.

Producers can find sampling guidelines, submission forms, prices and other information on the VDL website at: vetmed.iastate.edu/vdl/resources/client-services/pathogens/mycotoxins. The site also includes a great deal of information about mycotoxins including species affected and health effects.