You are here: Home / News / The Hot Sardines bring their jazz act to Iowa (audio) 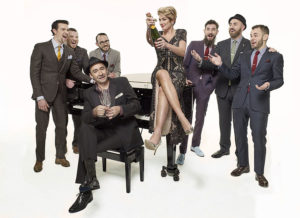 A New York-based band playing jazz from the 1920s, ’30s and ’40s is making two Iowa stops this weekend on its latest national tour.

Backed by a piano, a stand-up bass, a full horn section and a percussion section that includes a tap dancer, Elizabeth Bougerol is the lead singer for The Hot Sardines.

“It’s wonderful to listen to an old Billie Holiday record but there’s something to hearing this music live,” she says, “watching a group of musicians largely improvising on stage and making up this music as they go along.” Bougerol was born and raised in France, while her Canadian grandfather was a band leader during the “hot jazz” age almost a century ago.

“If you’ve heard anything by Louis Armstrong, Billie Holiday or Fats Waller, if you’ve dug out vinyl from your grandparents’ collection, that’s the music that we wanted to try and recreate,” Bougerol says, “because there wasn’t a lot of, some people call it traditional jazz but honestly we call it just pop music — from another era.” She met pianist and band co-founder Evan Palazzo in New York in 2007 thanks to a popular website.

“He and I met at a jazz jam that was advertised on Craigslist,” Bougerol says. “He had taught himself to play piano, I had taught myself to sing but neither of us had done much of it, if any of it, outside of our homes. We just kind of met at a time when each of us wanted to do something with it, really just as a hobby.” They never envisioned creating a touring band, she says, calling their wide popularity “an incredible surprise.”

The music may be 8 or 9 decades old, but Bougerol says their mission is to make old sounds new while proving cheerful jazz can bring people together in a disconnected world.

“These songs have endured, some of them for almost 100 years, for a reason,” Bougerol says, “I think, first, they’re great songs, but also because they’re great songs, artists in every new wave of musicians want to tackle them and want to bring something of themselves to them.” The Hot Sardines’ self-titled debut album was named by iTunes as one of the best jazz albums of 2014. It spent more than a year on the Billboard Jazz Chart, debuting in the top 10 alongside Tony Bennett and Lady Gaga.

The Hot Sardines play at North Iowa Community College in Mason City on Friday and two shows at the Temple Theater in Des Moines on Saturday.