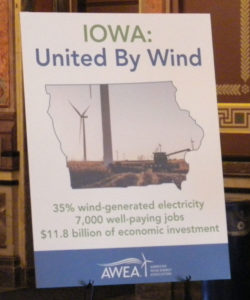 Governor Terry Branstad made the announcement in the rotunda of the Iowa State Capitol.

“From July of 2015 to July of 2016 — in that fiscal year — over 35 percent of the electricity produced in Iowa came from wind energy. In fact it was 35.8 percent,” according to Brandstad.

The AWEA report says Iowa is the first state to produce 30 percent or more of its electricity from wind. Kansas is second behind Iowa, followed by South Dakota, with both producing more than 25 percent of their state’s electricity with wind.

“With over 3,100 megawatts of wind under construction or development right now — we are really poised to propel our renewable energy economy even further,” Reynolds says. “…It’s not just about electricity production itself, it’s also the fact that it supports the economy of Iow and jobs. Wind supports nearly seven-thousand Iowa jobs.” MidAmerican Energy vice president Mike Feher says his company wants to keep increasing its wind capacity along with its other renewables.

“Our goal is to generate as much renewable energy each year as our customers in Iowa use. At the end of this year we expect to be at about 58 percent. With the completion of Wind Eleven (wind farm), we expect to be at 85 percent,” Feher says. Alliant Energy vice president Terry Kouba says his company is also moving forward with more wind energy.

“I am pleased to say our company recently received approval for our new wind energy project,” Kouba says. “This exciting nearly one billion dollar project will add up to 500 megawatts of new wind energy for our customers in Iowa. That’s enough to power approximately 215-thousand homes.” 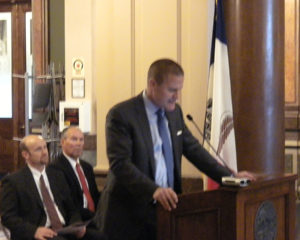 AWEA Board Chair, Chris Brown, says Iowa saw the potential of wind power before other states and it has paid off.

“You had two powerhouse politicians — Governor Branstad and Senator Grassley — those are two big pillars of our industry and they attracted wind early to the state. And I think you’ve had a very reasonable public utility commission and you’ve had strong utilities who’ve said ‘hey we are going to do this because it’s good for our consumers’,” Brown says. Brown says Iowa’s open landscape also lends itself well to wind farms.

“It’s the perfect place to develop wind if terms of if you were to draw up a place in the country — it’s got plenty of land, it’s got great wind resources,” Brown explains. Brown says better technology and improved turbines have brought the cost of wind down and that has also led to the success in Iowa.

“It’s the most economic source of generation right now, so we are winning on cost. We are winning on price. We are not only winning because it’s the morally right thing to do for the country,” Brown says. Brown says the power produced by wind has helped Iowa lure businesses like Google and Microsoft to the state. And he says farmers are benefiting from rental payments made for the land where wind turbines are built.