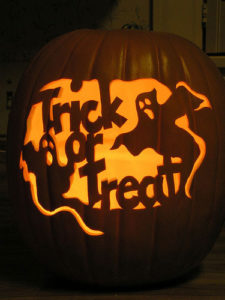 With the costume parties, the candy and the trick-or-treating, Halloween is an exciting time for kids but it’s also a very busy time for the experts who answer the hotline at the Iowa Poison Control Center.

Registered nurse Joan McVoy says last Halloween, they got more than 300 calls from worried parents on a single topic. “The thing we get most of our calls on is the glow sticks,” McVoy says. “Their child has chewed on it, they love to put those in their mouth because they’re soft to chew on and they can easily be broken open and then these children, all of their mouths are glowing.”

McVoy says in most cases, it’s not necessary to call an ambulance or speed to the hospital. “Don’t go to the emergency room, call the poison center,” McVoy says. “We will save you some money, keep you at home, tell you exactly what you need to do. It usually is just going to cause some irritation to the mouth. If they get it in their eyes, we’ll tell you how to irrigate the eyes and we’ll do a follow-up call, but by far, that’s the call we’ll get the most on Halloween night.”

Marijuana edibles have not been a problem for Iowa trick-or-treaters, but elsewhere, the treats have been dropped in kids’ bags as a bad prank. The pricey pot-laced products can resemble traditional candies in their names and packaging.

“We don’t get a lot of those but we’re just trying to let people be aware that they’re out there,” McVoy says. “They are very expensive. For a Tootsie Roll-type, they’re like $20, so it’s hard to think people would just be putting these in children’s bags, but it’s something to think about.

Make sure when the kids come home, go through their bag. Look at anything that looks suspicious. Throw it out if it’s not wrapped.” You can reach the Sioux City-based statewide poison center at 800-222-1222 or log on to: www.iowapoison.org.