You are here: Home / News / King and Grassley react to latest in Clinton email case 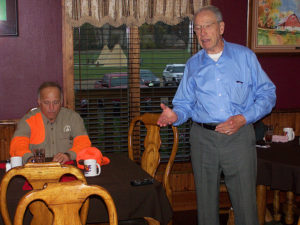 Two of Iowa’s top-ranking Republicans are reacting to the surprise news the FBI will be investigating new material related to Democratic presidential nominee Hillary Clinton’s use of a private email server.

U.S. Senator Chuck Grassley says there must be significant new evidence in the case since FBI Director James Comey says it warrants another look by the bureau.

“There’s obviously something there,” Grassley says. “When he said that the cases were closed, that’s what he told the House of Representatives so if there’s some reason to open it, it must be very serious. That’s the conclusion I think you can draw.”

Even with the election looming a week from tomorrow, Grassley says Comey should take his time and do a complete investigation without rushing. Grassley says, “He should do as he did in the year that they took to review other email stuff, do it thoroughly and not get pressure from the White House, from Loretta Lynch or from the Clinton campaign to speed things up.”

Congressman Steve King, a Republican from Kiron, says the FBI’s latest actions are a “solid signal” that the new evidence in the case is “very serious.” “It has huge magnitude,” King says. “For James Comey to have to open it up, he had to be thinking if he waits until after election, the impact of this information on a potential president-elect or even later on a president of the United States, sworn into office, would be so devastating that it needs to be opened up now.”

King agrees with Grassley that the FBI needs to “get to the bottom” of this case. King says if Hillary Clinton and other key figures are again called before the FBI to provide information, changes need to be made in how the interviews are conducted.

“Those depositions need to be videotaped, they need to have an audio tape, they need to have a transcript,” King says. “The credibility of the last investigation, no one accepts the idea of how they handled that, no one. That needs to be upgraded. I want to put that warning out there, get it right this time.” King and Grassley made their comments Sunday at a hunting lodge in the northwest Iowa town of Akron prior to a pheasant hunt being hosted by King.

The Democratic leader of the U.S. Senate has accused the FBI director of “partisan actions” that may have violated a federal law designed to keep federal employees from trying to use their influence to interfere with an election. Clinton has called the FBI’s actions “unprecedented” and “deeply troubling because voters deserve to get full and complete facts.”