You are here: Home / Sports / Cyclones bid for rare victory against Oklahoma 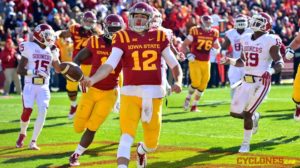 It is considered one of the most lopsided series in all of college football and Iowa State will try to get one in the win column against 12th ranked Oklahoma on Thursday night. The Sooners have won 17 straight games against the Cyclones and lead the all-time series with 73 wins to five for ISU and there have been two ties.

Cyclone coach Matt Campbell says it will take a complete effort by his team.

“On both sides of the ball they have the ability to control the game”, said Campbell. “They have got elite athletes across the board and what you have to do is you have to do great job of dictating the tempo of the football game.”

Oklahoma is 6-2 after rolling past Kansas and coach Bob Stoops says the history of this series won’t play any factor in the outcome of Thursday’s game.

“Those are different coaches and different players”, said Stoops. “Our focus is mainly on what can we control and that is being our best and how we can compete and play.”

The Cyclones are 1-7 and still in search of a statement victory in Campbell’s first season at the helm. They squandered a fourth quarter lead in a 45-42 loss to 13th ranked Baylor back on October first.

“You would love to see here somewhere this click that we do all the little things it takes to get to the fourth quarter and now win the football game.”

Kickoff in Jack Trice Stadium is 6:30p.m. The game will be televised by ESPN.