You are here: Home / News / Online video may provide clues on motive in police shootings

A video posted on YouTube may provide some clues in the case of this morning’s fatal shootings of two Des Moines area police officers.

The video posted by Scott Greene in mid-October details an incident at a high school football game. In the video, Greene says he was waving a Confederate flag at the game when he was “mugged” and the flag was taken away. Greene began recording the video outside the Urbandale High stadium after police officers escorted him out.

“Sir, we’re asking you to leave,” the officer says. “Have I committed a crime?” “We’re asking you to leave.” “Have I committed a crime?” The video from October 14th is entitled: “Police Abuse, Civil Rights Violation at Urbandale High.” In the comment section, the poster typed: “This is an assault on a person exercising his constitution rights on free speech!” Greene is heard conversing with two police officers outside of the stadium.

“Someone behind me hit me and they stole, it was almost like a mugging, because I had my property, I was holding it and they stole it from me.” “What did they steal from you?” “The flag that this officer right here is holding.” “Okay, he’s going to give that back to you so it’s back.”

Greene was given the flag but refused to leave the area and an officer is heard addressing him, by name. Officers threated to charge Greene with tresspassing if he wouldn’t leave but Greene maintained he wanted assault charges filed against someone in the crowd and insisted he wasn’t causing a disturbance.

The scene of the first shooting near the Urbandale High School.

“I was standing there.” “I’ve got several individuals that came down and said you were causing a disturbance in the stadium and that’s why we asked you to leave.” “I walked down and I stood there and I held up a flag.”

The first of this morning’s two shootings took place at the very corner where the video was shot, outside the stadium. Police say the suspect in the “ambush-style” attacks is 47-year-old Scott Michael Greene of Urbandale. Greene was last known to be driving a blue 2011 Ford F-150 with Iowa license plate 780 YFR. The truck has a silver colored topper with a ladder rack. 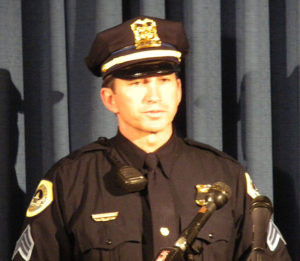 Des Moines police spokesman, Sergeant Paul Parizek, says they hope to release the names of the Urbandandale and Des Moines officers who were shot to death early this morning. Parizek says officers are still working at the shooting scenes and a nationwide alert has been sent out for a man they want to talk to 46-year-old Scott Michael Greene as they believe he has “information that is critical to this case”.

“Right now we are following some leads on where he might be. Anybody who has any information at all that could help us out with that is urged to call 9-1-1, we will take that as an emergency call,” Parizek says. “Please don’t approach Mr. Greene, we believe he is most likely armed and very dangerous.”

He says it appears Greene was very specific in his attacks. “The suspect didn’t see to target anybody in the public. He seemed to target specifically police officers, so I think that is something that might put some people’s minds at ease. I mean, obviously he’s not above doing something dangerous…everybody just be a little more vigilant as they move about,” Parizek says. Parizek says they were aware of some past issues with Greene, but he can’t pin down a motive for the shootings.

“Often times in these cases we find that we won’t determine a motive most likely until the end of this. And sometimes we don’t even determine what the motive is at that time — they won’t tells us,” Parizek “And then when we do learn it, often times it won’t make any sense. I can’t imagine would make sense of shooting two police officers sitting in their cars.” Parizek says they have double up officers at this time to provide a little more protection. He says officers are moving ahead despite the grief of the loss.

“This is obviously the second incident this year and the third officer that the Des Moines department has lost in the line of duty. It is difficult to do our day-to-day business, but it is what we do. The community has the right to expect that service isn’t interrupted And that we give them that same thing every day regardless of what’s going on and that’s what we are going to deliver,” according to Parizek.

An Urbandale Police Department spokesperson believes this is the first officer in the city killed in the line of duty.