You are here: Home / Crime / Courts / Urbandale police were familiar with man in custody in officer shootings

Police in the Des Moines suburb of Urbandale have had several encounters with the man in custody for killing two policemen early this morning, but Urbandale Police Chief Ross McCarty says there was no indication that Scott Michael Greene might resort to such violence.

The 46-year-old Greene is accused of first gunning down Urbandale Officer Justin Martin, who was shot in his patrol vehicle around 1 a.m.

“Our officer took fire from the side of his vehicle,” McCarty said. “We can’t tell you how many rounds he took through his vehicle, but I’m pretty sure it’s over 15 and under 30.” Moments later, about two miles away, Greene allegedly shot and killed Des Moines Police Sergeant Anthony Beminio, who was also in a patrol car. Investigators have said there was likely nothing the officers could have done to prevent the attacks.

Greene was taken into custody at around 9 a.m. in rural Dallas County, where he flagged down a state DNR worker and asked him to call 911. McCarty said Greene appeared in court Tuesday afternoon, but it’s not clear if that played a role in shootings.

“I’m not sure…his mother and him had a disagreement over something and I don’t know if it was a civil case or if it was criminal,” McCarty said. Prior to Greene’s arrest, Urbandale Schools canceled classes for the day on McCarty’s suggestion. McCarty said Greene made “indirect” threats to the school district. 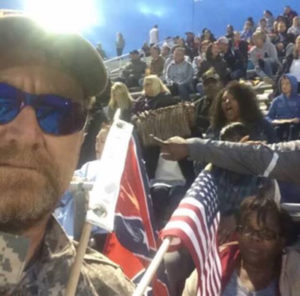 “There’s been some issues with the Urbandale School system lately and we’ve issued trespass warrants to Mr. Greene,” McCarty said. “The school system was in the process of working out what those would be, being he also has a daughter who’s a student in the school. So, they were setting the perimeters and working through that.” In mid-October, Greene posted a video to YouTube which documents his removal from an Urbandale High School football game. McCarty said, as of this morning, he had not seen the video but he was familiar with the incident.

“I understand he had a Confederate flag and he was waving it during the national anthem. He had picked some people of color to wave it in front of,” McCarty said. “Although they didn’t complain to us, there was people in the crowd who felt it was offensive and he should be removed from the stadium.” Greene began recording the video outside the stadium after police officers escorted him out.

“He said he was invoking his First Amendment rights and that we were trampling on them,” McCarty said. “Officers told him that he was on private property and the people in charge of that property did not want him there. He left the school grounds, but used the public sidewalks to continue his demonstration.” Police have said they believe Greene is the sole suspect in the murders of the two officers.