You are here: Home / Crime / Courts / Des Moines chief says shootings ‘cowardly in every sense of the word’ 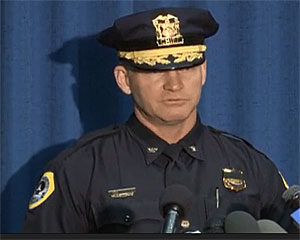 Des Moines police chief Dana Wingert spoke out today about the shooting of two officers Wednesday. Wingert was visibly angry as he spoke to reporters at police headquarters.

“What happened yesterday was calculated murder of two law enforcement officers. If someone wants to argue that with me, my office is two doors down.”  Wingert says he has little interest in the “reasons” why a man chose to ambush and kill two officers early Wednesday. “I won’t reason or try to make sense of this. This was calculated murder. There’s no if’s, and, or buts about it,” Wingert said. “It was cowardly in every sense of the word, from the way it was carried out to the way it ended.”

Urbandale Police Officer Justin Martin was shot around 1 a.m. and 20 minutes later Des Moines Police Sergeant Tony Beminio was shot to death as he responded to the first shooting. The chief talked about the suspect in the shootings, 46 year old Scott Greene of Urbandale. Greene was captured around eight hours after the killings after his truck became stuck in a wooded area in rural Dallas County. Greene flagged down a DNR employee, leading to his arrest. 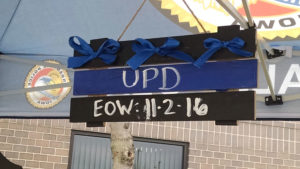 “When something like this happens, the suspect — the monster that does this — has options of how this is going to end and there’s only a few of them. You can imagine what they are. He chose to run and hide,” Wingert says. Wingert says the attacks on the two departments will not deter them. 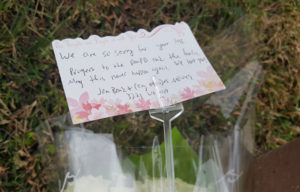 A letter at the Des Moines Police Department memorial.

Hundreds of people have visited both police stations to lay flowers on squad cars that have been set up as memorials to the two fallen officers. Wingert says the ambush style killings of the officers are not something that is normal.

“It was a cowardly act of calculated murder. and unfortunately we all as a community, as police departments, as families, we are all left to deal with the aftermath,” Wingert says. “That’s not typical to Iowa, that’s not typical to our communities and we know that. And we appreciate the outpouring of support.” Wingert finished his emotional statement and did not take questions.

Police spokesman Sergeant Paul Parizek did give an update on the investigation into the shootings. He says they have found a rifle believe to be used in the shootings that was in the wooded area where Greene’s truck was found.

“We had one of our explosive detection dogs that was an ATF gift to us to search out explosives. That dog was able to track that gun down in a place that no person would have found it,” Parizek says. Parizek says Greene remains in the hospital for an illness that was unrelated to the shooting. He says they are waiting to file charges until he can be interviewed.

“There’s been no conversation. We can’t start talking to him when he is in the hospital,” Parizek explains, “we have to follow this legal process the way it is supposed to be done. He’s got rights and we are not going to talk to him until they say he’s able to be spoken to. So, we haven’t had any conversation with him.”

Parizek says they want to take every precaution to ensure they correctly follow the procedures, as they only get once chance to get things right. He says Greene is expected to be turned over to them later today and they will then determine the charges against him.

Parizek says every available resource in the Des Moines and Urbandale departments is being used in the investigation along with help from state and federal officials. There has been some speculation that a situation where Greene was asked to leave an Urbandale football game and then posted video of it online may’ve been part of the motive for the shooting. Parizek says they still don’t know what they motive may’ve been. He says they are not ready to connect the video incident to the shootings and says the detectives will figure that out. “You all understand this, we’ve got one big puzzle to put together piece-by-piece, that’s one piece of it…a lot of this is going to depend on what he tells us, if he tells us anything,” Parizek says.

The funeral arrangements for the two officers are still pending.