You are here: Home / Human Interest / Tree stump trimmed into tribute to veterans 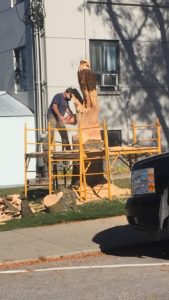 A unique way to commemorate veterans and their service to our country is now on display in the southwest Iowa town of Creston. It’s located on the grounds of the Union County Courthouse.

Union County Supervisor Dennis Brown spearheaded the project which involved carving a tree stump into a bald eagle, the emblem of the United States. “We had four to six trees around the courthouse, locust trees, that had been planted around 50 years ago…and they’re reaching the end of their life expectancy,” Brown said.

The trees have been removed, but one stump was still in place and it’s now carved into an eagle. It will eventually include a plaque stating the piece is dedicated to veterans. “In my mind, we need constant reminders of things like this – we tend to forget what our veterans have done for us in peace time and in war time,” Brown said. “We can’t have too many of those reminders…we should never forget.”

Gary Keenan, the Iowa State Fair’s chainsaw carving artist, completed the eagle this week. The project cost about $1,500. It was paid for through private donations.