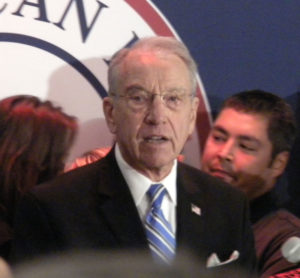 Finally, the entire legislative branch at the Iowa statehouse will be led by Republicans. Iowa GOP chairman Jeff Kaufmann was in a celebrating mood.

“We listen to the people and we respond to the people,” Kaufmann said, his voice rising as he pounded the lectern. “And I know there are a lot of tears going on in the ivory towers of the universities, but guess what? The people also have the intelligence in this state!”

Bill Dix, a state senator from Shell Rock, orchestrated the Republican effort to seize control of the Iowa Senate’s debate agenda from Democrats.

“I came in cautiously optimistic,” Dix said. “I know we had hard-working candidates who just were relentless and bottom line, at the end of the day, that’s what makes the difference.”

Long-time Republican Governor Terry Branstad has gotten his wish for a Republican-led senate.

“We thought we could maybe win five seats,” Branstad said. “We won six, so, it was a great night and I’m really looking forward to working with both the House and the Senate.”

Republicans kept their working majority in the Iowa House, too. Republicans were even able to dethrone the legislature’s top Democrat. Senator Mike Gronstal of Council Bluffs, a 34-year veteran of the legislature, was defeated in his reelection bid. During an interview in early October, Gronstal argued Democratic incumbents could win by employing person-to-person tactics rather than spending “big money” on advertising.

“What power do we have? We have the power to run smart, savvy campaigns, knock on lots of doors and make personal contact and if we do that well, we can be proud of our effort,” Gronstal said, “regardless of what the outcome is.”

The polls in Iowa closed at 9 p.m. Tuesday and Grassley was quickly declared the winner of a seventh term in the U.S. Senate.

“This is a great night. Thank you all very much,” Grassley said, getting cheers and applause from the crowd gathered in Des Moines at Iowa GOP’s Election Night headquarters. “Thank you all for your support. None of this would be possible without peole like all of you and the thousands of people that volunteer across Iowa.”

Grassley was first elected to the state legislature in 1958. Grassley was a member of the Iowa House for 14 years, then he served six years in the U.S. House of Representatives. Grassley first won his seat in the U.S. Senate in 1980.

“I will operate in the same way I always have operated, in the best interest of all of you and three million Iowans.”

Grassley, who is 83 years old, is one of the most senior members of the U.S. Senate. He’s done a turn as chairman of the Senate Finance Committee and, since January of 2015, he’s been chairman of the powerful Senate Judiciary Committee.

Democrat Patty Judge, who’s 72, initially balked at the idea of coming out of political retirement and challenging Grassley, but, the former lieutenant governor entered the race eight months ago.

“While I would’ve liked to have seen a different outcome, let me be very clear: I don’t regret a single day that I’ve been in this race,” Judge told her supporters. “That’s because we have given a voice to issues that were not being discussed on the floor of the Senate.”

Judge claimed Grassley benefited from “significant resources” due to his “relationships with the most powerful special interests in the country.”

“I knew it wasn’t going to be easy. Chuck Grassley has been in Washington for 42 years,” Judge said.

Grassley, as chair of the Senate Judiciary Committee, has blocked President Obama’s Supreme Court nominee. Judge criticized Grassley on that issue throughout the campaign.

“I hope that as he goes back to Washington that he will put our country first, before his political party,” Judge said.

Iowa’s three Republican congressmen are headed back to Washington. Veteran Steve King easily defeated his Democratic challenger to win an eighth term in the U.S. House. King called it a “low key” race.

“Very, very low key,” King told Iowa Public Radio. “I didn’t hear any issues that were brought forward by my opponent that got any traction at all.”

Blum supporters, gathered in Dubuque, erupted when the race was called in his favor. Blum told the crowd he’s going back to congress to finish what he started when he cast his first vote — against then-House Speaker John Boehner.

“The Washington establishment, the ruling class, put their finger in my chest and I will never forget these words. They said: “You will never be back here. You, Blum, just ended your political career,'” Blum said.

Democrats had targeted Blum and D.C.-based rating agencies ranked Blum as one of the most vulnerable Republicans in Congress.

“I was always hounded by the media,” Blum said. “We were followed by trackers videotaping every step for two years and they said I had no chance to come back to Washington D.C.,” a triumphant Blum told supporters.

Another rookie Republican congressman — David Young of Van Meter — got reelected, too. Young spoke to supporters in Des Moines shortly after 10 o’clock. Young says no matter who is president or the speaker of the House, his focus will be on serving his constituents.

“We live in a great nation, founded on the First Amendment,” Young said. “We fled the monarchy of England for freedom of religion and I want to thank my Lord, Jesus Christ, for getting me through this day because it’s not easy and I lean on him.”