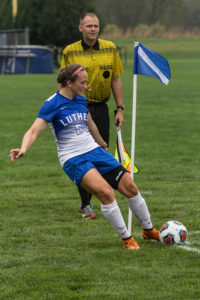 It has been a banner season of soccer on the campus of Luther College and both the Norse men’s and women’s teams are preparing for the NCAA Division III Tournament. The Luther women travel to St. Louis to play Denison University in Saturday’s opening round.

It is the program’s first appearance in the NCAA Tournament but coach Russ Schouweiler says his team is not satisfied by just getting there.

“We are not one and done”, said Schouweiler. “We are not their just for the ball. We are there to keep going and prove to people that we are worthy and show people what Luther soccer is and what it has been and that is a national prominent program.”

Defense has been the strength. The Norse have yielded only 11 goals all season.

The Luther men are in the NCAA Tournament for the first time since 2013 and travel to St. Thomas of Minnesota to play St. Norbert College. The Norse won two road contests to claim the Iowa Conference Tournament title.

“I thing are kids are battled tested with regards to that”, said Luther coach Chris Garcia-Prats. “We have played tough games on the road already and those games made a difference. Our kids are playing well right now.”