You are here: Home / Business / Plant to close in northwest Iowa, 140 will lose jobs 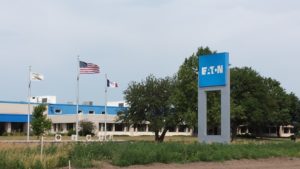 A manufacturing facility in northwest Iowa that currently employs 140 people will shut down by next October.

Jim Michels, spokesperson for Eaton Corporation, says employees at the Spencer Eaton Hydraulics Plant were told the news on Wednesday. “We met with employees to share that the company will be ceasing operations and closing the facility in Spencer by the end of the third quarter 2017,” Michels said.

The plant in Spencer manufactures heavy duty hydraulic pumps and motors. Michels said demand for the company’s products made in Spencer have been dropping. “By the end of September this year, North American Original Equipment, agriculture equipment sales were down almost 16-percent,” Michels said.

Michels also noted the Spencer facility supplies a lot of products for combines. “And as of the end of September 2016, North American combine sales were down 26.5 percent compared to September 2015 and year-to-date down 20.4 percent,” Michels said.

Everyone working at the plant will be given a 60-day notice prior to the elimination of their job, according to Michels. Those job cuts will begin in the first quarter of next year and continue through September. The Eaton plant in Spencer opened in 1974.