You are here: Home / News / Vilsack willing to guide party toward ‘important business’ of 2018 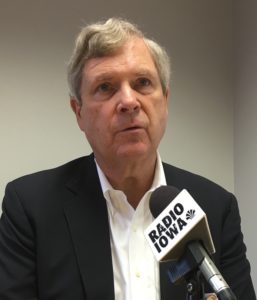 Congressman Dave Loebsack — the only Democrat in Iowa’s delegation in D.C. — last night said it’s time for some “soul searching” in his party and a former Democratic Party leader may be ready to guide his party through that process.

Former Iowa Governor Tom Vilsack got a sustained standing ovation in early October when he was introduced at the Iowa Democratic Party’s Fall Gala.

During an interview with Radio Iowa, Vilsack indicated he’s willing to help “guide” the party intot he future.

“I think I can help and I think Christie can help,” Vilsack said.

“So she has maybe an even better understanding of what’s going on out there, at least in western Iowa,” Vilsack said.

After being elected as Mount Pleasant’s mayor, as a state senator and as the state’s two-term governor, Vilsack said he feels a “great debt of gratitude” to Iowans and to the state’s Democratic Party.

“There’s a sense of loyalty and connection that I feel that means for as long as I live, to the extent that I can be of help, I can provide advice and direction, I should be going that and I need to do that and I’m happy to do it,” Vilsack said. “We have a great party in Iowa and it needs to be a strong, progressive voice to counter the conservative right-wing more extreme voice that we often hear from the other side and, frankly, I think it’s more consistent with the majority of Iowans and their views about things.”

Supporters of Bernie Sanders, not Hillary Clinton, hold a narrow majority of seats on the Iowa Democratic Party’s State Central Committee. Party leaders on that committee will choose the party’s next chairman. Vilsack said he’s willing to be a peacemaker between the two party factions.

“You know, it just takes time, but the goals are the same,” Vilsack says. “The goals are moving opportunity forward. The goals are making sure that working families, middle income families can get better opportunities for their kids, to continue to have that notion that if you work hard enough (and) play by the rules, you can have a great life in this country.”

The party has “important business” ahead — the 2018 election — when Iowans will make their choices for governor and other elected officials in the executive branch of state government. Would Vilsack consider running for governor again?

“I have no plans on running again,” Vilsack said. “I think there’s a new generation of younger leaders out there.”

Vilsack, who is 65 years old, suggests he’ll fill the role of elder statesman to move his party beyond the internal “insults, slights and grievances” of the past.