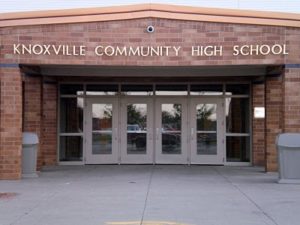 The parents of a 14-year-old girl who texted “suggestive” pictures of herself to a boy have filed a lawsuit against the Marion County Attorney’s office. The case stems from a “sexting” investigation earlier this year at Knoxville High School, where students were found to be circulating nude photos of other students.

The parents who’ve filed suit say the two photos involving their daughter don’t show any nudity. ACLU of Iowa legal director Rita Bettis calls this a case of free speech and expression. “Second, as a policy matter, we also believe that it truly defies common sense to threaten to put a child in jail or prison, or place her on the sex offender registry for taking photos of herself,” Bettis said.

According to the family, Marion County Attorney Ed Bull threatened the girl with sexual exploitation charges, but said she could avoid prosecution by signing an admission of guilt, attend classes on the danger of sexting, and complete community service.

In the ACLU lawsuit, the girl is identified as Nancy Doe. “In the end, Nancy Doe hasn’t even engaged in behavior that is a crime,” Bettis said. “We believe the county attorney’s response to her behavior violates her and her parents’ rights.”

Court documents show in one of the photographs, the girl is wearing a sports bra and shorts. In the other, she’s in shorts with her hair covering her breasts.

Bettis added that it should be the parents’ job to raise their daughter, not the county attorney’s. The parents of the girl are not seeking a monetary reward or damages, they only ask that the threats of prosecution be dropped. “This is about parents who feel like they have no choice but to try to protect their daughter from what is a really terrifying threat of criminal prosecution,” Bettis said.

Marion County Attorney Ed Bull has not responded to Radio Iowa’s request for comments on the case and lawsuit.