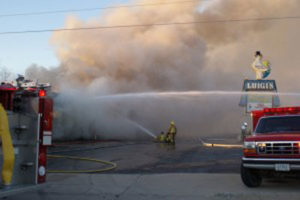 Luigi’s in Oelwein burned down Saturday.

A decades-old landmark restaurant in northeast Iowa has burned to the ground.

Firefighters were called out shortly after 3 p.m. Saturday to Luigi’s Restaurant and Lounge in Oelwein, where they found the building engulfed. Fire crews from Oelwein, Hazleton and Maynard were not able to save the business, which has been in Oelwein since at least 1959.

According to Oelwein Fire Chief Wally Rundle, the fire may have started in the kitchen area, and spread very quickly. The restaurant was open at the time, but everyone inside was able to get out unharmed. Rundle stated that a waitress spotted the smoke coming from the back area of the building.

The cause of the fire is under investigation. The fire completely gutted the restaurant. Thick smoke from the blaze blanketed most of the south side of Oelwein, and could be seen from miles away. The business is owned by the Stasi family, and specialized in Italian food. Luigi’s was also the site of many parties, receptions, and a popular meeting place for groups and organizations.